Colloidal semiconductor nanocrystals and nanowires present an exciting new class of solution-processable materials for the low-cost, large-area fabrication of flexible, thin film electronics. In the Kagan group, we study the role of surface chemistry on processability and nanocrystal coupling, passivation and doping and develop fabrication methods to construct and tailor the characteristics of electronic devices and circuits from colloidal nanocrystal inks. We design more complex integrated, flexible nanocrystal circuits for a growing number of electronic and sensing applications.

Self-assembly, a process in which molecules, polymers, and particles are driven by local interactions to organize into patterns and functional structures, is being exploited in advancing silicon electronics and in emerging, unconventional electronics. Silicon electronics has relied on lithographic patterning of polymer resists at progressively smaller lengths to scale down device dimensions. Yet, this has become increasingly difficult and costly. Assembly of block copolymers and colloidal nanoparticles allows resolution enhancement and the definition of essential shapes to pattern circuits and memory devices. As we look to a future in which electronics are integrated at large numbers and in new forms for the Internet of Things and wearable and implantable technologies, we also explore a broader material set. Semiconductor nanoparticles and biomolecules are prized for their size-, shape-, and composition-dependent properties and for their solution-based assembly and integration into devices that are enabling unconventional manufacturing and new device functions.

Subwavelength metal and highly-doped semiconductor structures support surface plasmons: collective oscillations of the delocalized electrons in the material upon interaction with light. In the Kagan group, we construct plasmonic structures through both top-down nanofabrication from bulk materials and bottom-up assembly from nanocrystal building blocks. We apply plasmonic nanostructures 1) to utilize their strong electromagnetic fields to enhance absorption, charge separation and photoluminescence in organic and inorganic materials and their devices and 2) as building blocks in the construction of large-area, broadband, tunable optical metamaterials. Nanofabrication has limited most optical metamaterials to 2D or, often with multiple patterning steps, simple 3D meta-atoms that typically have limited built-in tunability. Here, with a one-step scalable patterning process, we exploit the chemical addressability and structural adaptability of colloidal Au nanocrystal assemblies to transform 2D nanocrystal/Ti bilayers into complex, 3D-structured meta-atoms and to thermally direct their shape morphing and alter their optical properties. By tailoring the length, number, and curvature of 3D helical structures in each meta-atom, we create large-area metamaterials with chiroptical responses of as high as ∼40% transmission difference between left-hand (LCP) and right-hand (RCP) circularly polarized light (ΔT = TRCP – TLCP) that are suitable for broadband circular polarizers and, upon thermally configuring their shape, switch the polarity of polarization rotation. These 3D optical metamaterials provide prototypes for low-cost, large-scale fabrication of optical metamaterials for ultrathin lenses, polarizers, and waveplates.

We program the optical properties of colloidal Au nanocrystal (NC) assemblies via an unconventional ligand hybridization (LH) strategy to precisely engineer interparticle interactions and design materials with optical properties difficult or impossible to achieve in bulk form. Long-chain hydrocarbon ligands used in NC synthesis are partially exchanged, from 0% to 100%, with compact thiocyanate ligands by controlling the reaction time for exchange. The resulting NC assemblies show transmittance, reflectance, optical permittivity, and direct-current (DC) resistivity that continuously traverse a dielectric-metal transition, providing analog tuning of their physical properties, unlike the digital control realized by complete exchange with ligands of varying length. Exploiting this LH strategy, we create Au NC assemblies that are strong, ultrathin film optical absorbers, as seen by a 6× increase in the extinction of infrared light compared to that in bulk Au thin films and by a temperature rise of 20 °C upon illumination with 808 nm light. Our LH strategy may be applied to the design of materials constructed from NCs of different size, shape, and composition for specific applications.

Synthesis and assembly of colloidal nanocrystals

Tunable synthesis and assembly of colloidal nanocrystals has allowed us to prepare new materials which enable a wide variety of sensing and communication applications, overcoming fabrication and environmental constraints which apply to more traditional bulk materials. By controlling the diameters of nanocrystals during synthesis, we create quantum dots with tunable photoluminescence properties that are determined by confinement effects. By controlling the stoichiometry of nanocrystal thin films, we control the carrier statistics and polarity of charge transport in nanocrystal thin film solids. By controlling the stabilizing ligands on the surfaces of colloidal nanocrystals, we can control their assembly and arrangement in thin films and thereby control the plasmonic and electronic properties of the films as well. Furthermore, using templated assembly methods, we can position nanostructures with various shapes and sizes according to their individual physical properties to create large-area metamaterials or multifunctional nanomaterials. For example, a templated assembly of structures may exhibit a chiral light sensitivity which no individual particle exhibits, and quantum dots co-assembled with plasmonic nanoparticles may exhibit enhanced optical properties. 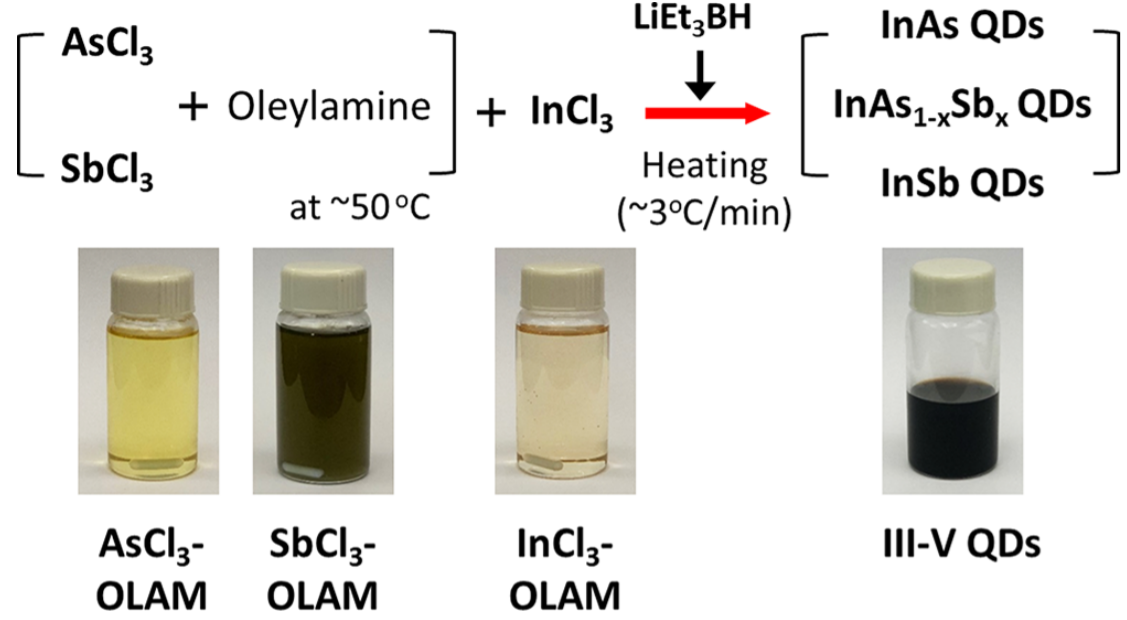 The synthesis of colloidal III–V quantum dots (QDs), particularly of the arsenides and antimonides, has been limited by the lack of stable and available group V precursors. In this work, we exploit accessible InCl3- and pnictogen chloride-oleylamine as precursors to synthesize III–V QDs. Through coreduction reactions of the precursors, we achieve size- and stoichiometry-tunable binary InAs and InSb as well as ternary alloy InAs1–xSbx QDs. On the basis of structural, analytical, optical, and electrical characterization of the QDs and their thin-film assemblies, we study the effects of alloying on their particle formation and optoelectronic properties. We introduce a hydrazine-free hybrid ligand-exchange process to improve carrier transport in III–V QD thin films and realize InAs QD field-effect transistors with electron mobility > 5 cm2/(V s). We demonstrate that III–V QD thin films are promising candidate materials for infrared devices and show InAs1–xSbx QD photoconductors with superior short-wavelength infrared (SWIR) photoresponse than those of the binary QD devices.

Assembling metamolecules from anisotropic, shape-engineered nanocrystals provides the opportunity to orchestrate distinct optical responses one nanocrystal at a time. The Au nanorod has long been a structural archetype in plasmonics, but nanorod assemblies have largely been limited to end-to-end or side-to-side arrangements, accessing only a subset of potential metamolecule structures. Here, we employ triangular templates to direct the assembly of Au nanorods along the edges of an equilateral triangle. Using spatially resolved, dark-field scattering spectroscopy in concert with numerical simulation of individual metamolecules, we map the evolution in surface plasmon resonances as we add one, two, and three nanorods to construct triangular nanorod assemblies. The assemblies exhibit rotation- and polarization-dependent hybridized plasmon modes, which are sensitive to variations in nanorod size, position, and orientation that lead to geometrical symmetry breaking. The triangular arrangement of nanorods supports magnetic plasmon modes where electric fields are directed along the perimeter of the triangle, and the magnetic field intensity within the triangle’s open interior is enhanced. Circumferential displacements of the nanorods within the templates impart either a left- or right-handed sense of rotation to the structure, which generates a chiroptical response under unidirectional oblique illumination. Our results represent an important step in realizing and characterizing metamaterial assemblies with “open” structures utilizing anisotropic plasmonic building blocks, with implications for optical magnetic field enhancement and chiral plasmonics.

Nanocrystal assemblies have been coined “artificial solids.” Charge injection and transport is of fundamental interest, to understand the cooperative interactions that develop and the delocalization of quantum confined electronic wavefunctions as nanocrystal building blocks are brought into increasingly strong coupling in the solid state. Transport studies are also of technological importance, as semiconductor nanocrystals are promising for a range of electronic, optoelectronic and thermoelectric applications. In the Kagan group, we use a wide range of electronic and optical spectroscopies to probe the nature and evolution of charge transport in nanocrystal thin films as we use ligand exchange chemistries, to control the interparticle distance and the strength of electronic coupling, and surface chemical modification, to passivate surface states and dope the nanocrystal thin films.

We report a family of two-dimensional hybrid perovskites (2DHPs) based on phenethylammonium lead iodide ((PEA)2PbI4) that show complex structure in their low-temperature excitonic absorption and photoluminescence (PL) spectra as well as hot exciton PL. We replace the 2-position (ortho) H on the phenyl group of the PEA cation with F, Cl, or Br to systematically increase the cation’s cross-sectional area and mass and study changes in the excitonic structure. These single atom substitutions substantially change the observable number of and spacing between discrete resonances in the excitonic absorption and PL spectra and drastically increase the amount of hot exciton PL that violates Kasha’s rule by over an order of magnitude. To fit the progressively larger cations, the inorganic framework distorts and is strained, reducing the Pb–I–Pb bond angles and increasing the 2DHP band gap. Correlation between the 2DHP structure and steady-state and time-resolved spectra suggests the complex structure of resonances arises from one or two manifolds of states, depending on the 2DHP Pb–I–Pb bond angle (as)symmetry, and the resonances within a manifold are regularly spaced with an energy separation that decreases as the mass of the cation increases. The uniform separation between resonances and the dynamics that show excitons can only relax to the next-lowest state are consistent with a vibronic progression caused by a vibrational mode on the cation. These results demonstrate that simple changes to the cation can be used to tailor the properties and dynamics of the confined excitons without directly modifying the inorganic framework.

We synthesize and characterize derivatives of the two-dimensional hybrid perovskite (2DHP) phenethylammonium lead iodide ((PEA)2PbI4) in which the para H on the cation is replaced with F, Cl, CH3, or Br. These substitutions increase the length of the cation but leave the cross-sectional area unchanged, resulting in structurally similar PbI42– frameworks with increasing interlayer spacing. Longer cations result in broader, blue-shifted excitonic absorption spectra with reduced or eliminated structure, indicating greater energetic disorder. Photoluminescence spectra are largely invariant and insensitive to cation length, suggesting polaron formation stabilizes a structural and electronic minimum. Temperature-dependent line width analysis reveals excitons couple to a vibration on the organic framework that is weakly sensitive to these cation substitutions, and Raman spectra and electronic structure calculations support the presence of such a cationic mode. Despite carriers being confined to the inorganic framework, the length of the organic cation alters the optical and electronic properties of 2DHPs.